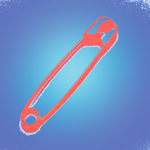 The best design isn’t necessarily the latest or the most high-tech. Seen on the BBC’s website this morning (“London 2012: 20 more Olympic Oddities“)

“Given the huge amount of money spent on sports wear and team outfits, why has no one come up with a better solution for attaching the competitor’s numbers to their vests other than using safety pins? Can’t do much for the fabric and so very low tech. Marie Aitken

It’s a matter of logistical convenience, says Andy Dixon, editor of Runner’s World. All the bibs are produced and controlled by Locog in London, and athletes are only given their bibs in the first call-room, about 40 minutes before the start of their event, where all of their kit gets checked to make sure it complies with Olympic rules (for example, it doesn’t feature any unauthorised logos). Their uniform will have been manufactured months in advance.

“Safety pins still trump self-adhesive labels, as the latter still depend upon how dry the material is when applied, and can sometimes come unstuck during rain or when the athlete gets sweaty,” says Dixon.

“For all their low-tech utilitarian nature, safety pins are clearly a successful product design – they have been around since before the first modern Olympics were even a glint in Baron de Coubertin’s eye. The Mycenaean Greeks, who were pretty handy metalworkers and toolmakers, are thought to have invented the safety pin, or fibula, in the 14th Century BC as a way of fastening garments together.”